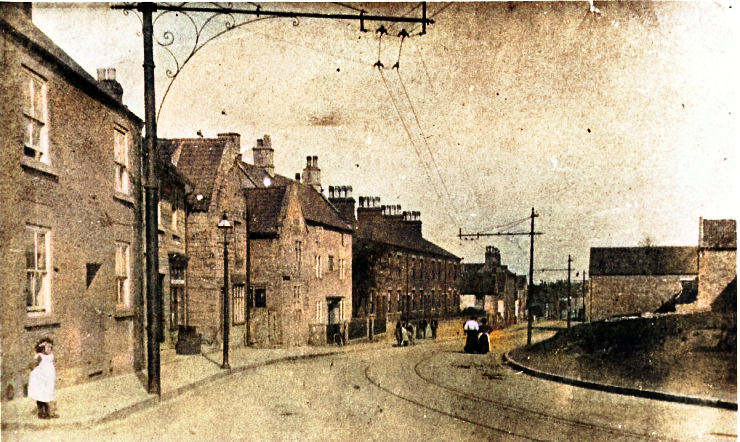 The Tivoli opened in a converted workshop 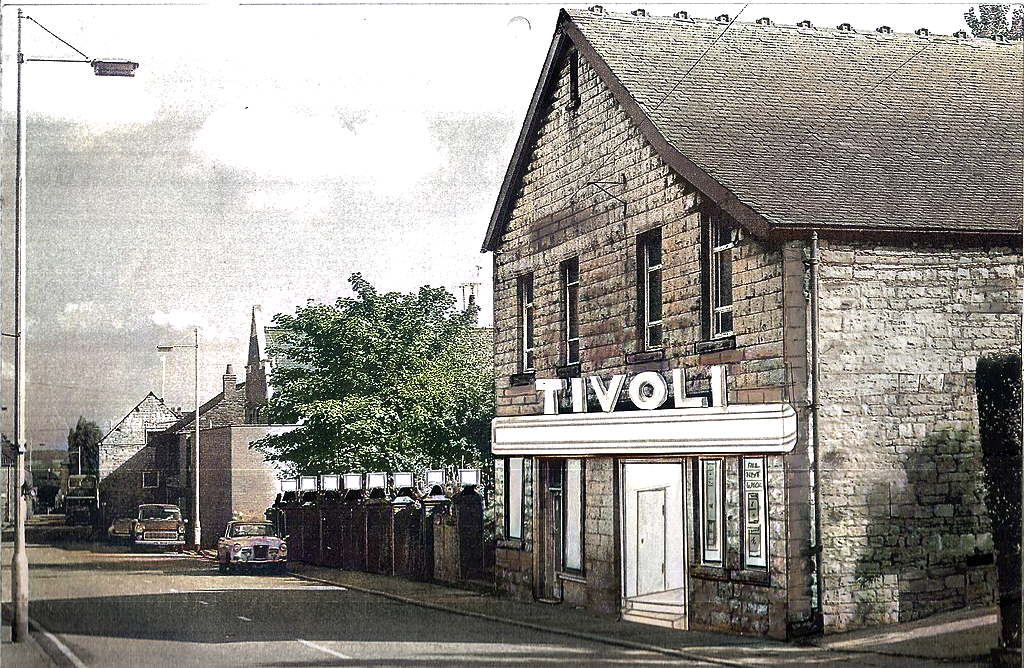 A mock up of the Tivoli was created by Malcolm Appleby, retired projectionist, using a photograph taken in 1975 by Keith Morris.

Mansfield Woodhouse Picture House on Station Street opened as a cinema on August Bank Holiday 1912. It has also been referred to as a theatre.

George Edward Hogg, of Blake Street, was the proprietor. He had begun his working life as a wheelwright and then worked in the pits before taking over a large workshop in Station Street, borrowing £60 from friends to convert it into a cinema. It had gas lighting, seats for 180 people and four exits. George said that the business was satisfactory until the war.

In 1916 he began working in munitions and left his wife and family in charge of the cinema. By 1920 the local authorities had condemned the premises as unsuitable for a cinema and so he set about making structural alterations.

The coal strikes of 1921 and 1926 caused business to fall away but George still went ahead and improved the exits in 1927.  By 1928 George’s son Wilfred was recorded as being the proprietor.

The Picture House re-opened as the Tivoli Cinema on 20 February 1933 after refurbishment.  The venue had new electric lights installed and was equipped to show films with sound. In total, there were 300 seats with charges of 6d, 8d, 9d and 1/-.

The owners were listed as William Pitchford and Partners, of Langwith, and the proprietor, Wilford Baden Whitehead, of Langwith. The telephone number was Mansfield 93.

The building received further refurbishment in 1946/1947.  The architect was Mr J W Shooter.  In its later years The Tivoli was operated by the owners of the Regal Cinema, Langwith and the Ritz Cinema, Bull Farm, Mansfield.

In the 1950s Ann Evans had a dress shop in the cinema, where people would recall seeing some of the dresses displayed in the window there. Later, Angus Brown operated a watch repair business from the Tivoli  in 1955.

The Tivoli eventually closed on 3 May 1958 due to dwindling attendances.

Mansfield Woodhouse Urban District Council revealed in June 1958 that they had considered purchasing the Tivoli Cinema for use as a civic hall, but decided that the cost was prohibitive.

In 1959 the Tivoli Cinema was converted into a warehouse for storage of footwear, soccer and rugby boots for Ward Brothers Ltd, Mansfield.

The Telephone Directories for 1962 and 1964 show that the Tivoli Salon, Ladies Hairdressers, also occupied part of the building.

The building was later used by Mudford & Co tent contractors and rope and twine dealers in the 1970s. Eason Print took the building over some time after Mudfords vacated it. More recently  Key Learning Centres  was based there as an educational facility. By 2016 ‘Need2Insure’, and Second Time Around a business which upcycled furniture for good causes were operating from the venue.

Malcolm Appleby, a retired projectionist, used Keith Morris’s 1975 photo and an aerial shot from the 1950s to create  a mock-up of how the Tivoli entrance would have looked in its heyday. The canopy stood proud from the building, above the ground floor level and just fringed both side elevations as well and supported the name sign TIVOLI (I wonder if the sign was illuminated for the evening performances?).

Posters were displayed in the recesses and lights topped each of the stone pillars to the left of the cinema. Malcolm explained that there was a flat roofed area at the rear of the building which could only be accessed from the outside which was the projectionist’s room, where highly flammable nitrate film was stored. It was replaced by safety film circa 1950. The projectionists circa 1955/56 were Ron Ward, Lou Burden, John Sewell and Ron Winfield. All four projectionists would work at the same time because of the number of reel changes during the length of a film. Other projectionists through the decades have included Bill Jennings and a Mr Smedley.

Malcolm is also drawing an internal view of the cinema which will be added to this article. He recalls stage curtains that did not meet in the middle and standard lamps and settees sitting along the right hand corridor. An entrance half way up the steps, at the left hand side of the building, regularly witnessed children queuing for the Saturday matinees. They paid just inside the door. 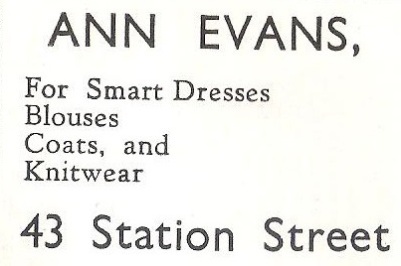 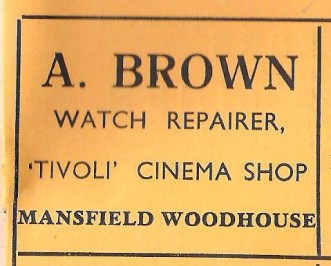 Ann Evans and Angus Brown both operated from

The Tivoli Cinema in the 1950s 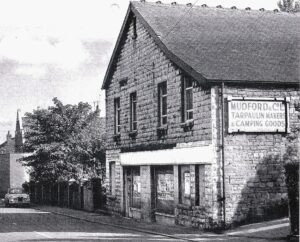 Mudford and Co. Ltd photo taken in 1975 by Keith Morris. 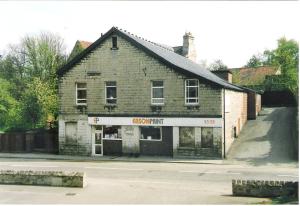 EasonPrint operated from the venue in the 1980s and early 1990s 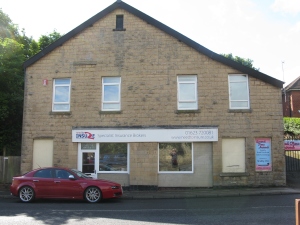 Having spoken to several residents about their memories of the Tivoli. Here are just a few;

Many people remembered that as children they queued up the steps for the tanner rush matinee every Saturday. It seemed to them that most of Woodhouse were there. The most popular films seem to be the ones starring Superman, Tom Mix and Buck Rogers, and Ginger Rogers and Fred Astaire in the dance musicals. Pathe news bulletins were also shown.

As the film was about to start the proprietor Mr Hogg would beat the stage with his cane and shout out loud to ask the children to be quiet. He would then erect a large board over the window to darken the room, and the audience would cheer. The adjoining sweetie shop was run by Winnie Jarvey and 2d would get you an ounce of sweets.

Affectionately known as the Bug Hut, the Tivoli was also referred to as the ‘Laugh and Scratch’ – ‘you went in laughing and came out scratching’.

Mr Hogg lived on Blake Street and the children saw him arriving at the cinema wearing his straw boater. His daughter worked for him and as the children tried to sit down she would keep moving them along towards the end of the benches – She always said ‘there’s room for one more’. You had to take care otherwise you could fall off the end.

A Woodhus Lass wrote to the Chad about her memories of Mansfield Woodhouse between 1916 and 1930. She referred to the Tivoli Cinema as the Bug Hut and she went to the penny rush there on Saturday afternoons. She explained how Mr Hogg the proprietor lined them up at the back of the cinema like rows of soldiers. They were then allowed to file by him, handing over their penny to get seated on the wooden forms. The pianist would strike up and during the showing of the serial feature ‘Pearl White’ they all sang ‘Pearl, Pearl, you’re a wonderful girl’ and continued the song and stamping the rhythm with their feet.

A Woodhus Lad, also featured in the Chad’s letters column, wrote that he used to go to the cinema on Station Street, called Hogg’s Opera. He said that it was full of noisy kids on Saturday afternoons watching silent films to fabulous piano accompaniment. Violinist George Harry Horrobin also provided accompaniment.

In the early 1930s Alice Coupland was the Mansfield Woodhouse Carnival Queen and one day she visited the Tivoli, took to the stage and sat upon a swing.

A former Boy Scout who referred to the cinema as Hogg’s Picture House remembers it was used at one time by the Boy Scouts with Scoutmaster Edwards. He said “We Scouts used to have buns and tea, even roasted chestnuts on the old fashioned coal stove at the back stand”.

A lady told me that as a child she would go to parties at the Tivoli where prizes were given out. In later years she and her fiancé did their courting there.

One youngster eager to see his first colour film which had been heavily advertised as such, was very disappointed. The film was in black and white as usual and the only colour element was a short four minute section inserted in the middle of the film as a dream sequence. It featured an impossibly high milk bar and the seats before it rose into the air, the columns of the seats were in different bright colours.

To help the war effort it was advertised that if you took in three jam jars complete with lids, you got free tickets for the film show. He said that his mum would not allow him to take her jars as she needed them for her jam making. He remembers that the box office was on the left and the entrance door on the right. This led to a long corridor with doors halfway along for access to the seats near the front and doors at the top which led to the seats at the back. The cinema screen itself was at the bottom end behind the entrance hall. The projectionist’s booth was reached by an outside iron staircase at the back on the right hand side. For small boys the ground beneath and the waste bins were a treasure house of bits of film cut out from when the film broke. All the children from the National School were taken to the Tivoli one day to watch a film about the Olympics. The smaller children sat two to a seat and then it was standing room only.

One woman said “In the 1950s we’d queue up the side steps to a door near the top and a man would be in the door hole with a box and we’d put our tanner in. It was called the Bug Hut then. We had a film and a serial of Flash Gordon. They’d stop it halfway through because we were so noisy and they wouldn’t put it back on so we never saw the end. The toffee shop had become a hairdressers when I was a teenager. The pictures were closed by then and it became a storeroom full of furniture, beds, mattresses and such. The hairdressers had no toilets so we had to use those in the old Tivoli upstairs.”

One young girl received 3d for supplying sand from the wasteland next to the Tivoli to her aunties who used it to darken their legs. An eyebrow pencil was then used to draw a line up the backs of their legs to simulate seamed stockings. Her aunties were usherettes at the Tivoli Cinema. They were the Bedford girls, Olive, Dorothy, Phyllis and Elsie.

Some of the other usherettes that worked there were Eileen Haywood, Margaret Jennings, Mary Minchin, Emma Moody, Georgette Mycroft, Vera and Joyce Briggs. When the usherettes had no sweets or ice cream to sell, loads of potato crisps were taken in. The crunching was deafening and nobody could hear the film at all then. Also some families would take in basins full of mushy peas and chips all wrapped in a towel to keep the food warm for them to eat during the interval.

In the 1940s the Tivoli manager was a Mr Hutchinson, who often threatened to stop the film if the kids misbehaved.

Ron Ward was the projectionist there in the 1940s and 50s and his wife Pearl worked there as well. Ron’s niece remembers walking up the three steps into the foyer where on the right was the ticket office. She added “To the right were the steps up and on the walls along there were glass shell-shaped light fittings. After buying your ticket you went up a short flight of steps on the right, where there was a long corridor like room with settees and standard lamps where you waited to go in. Exiting customers would leave the cinema via the side door down the steps to Station Street. There were three seat prices depending on where you sat. The back seats were 1/9d; middle seats 1/- and front seats 9d“. One Woodhouse resident would reply in rhyme when asked where as a child she’d been “Where you been, been to Tiv, where do you live, back of Tiv“.

To close: In support of early recycling it seems! For it was said that when the Tivoli closed down in 1958, the tip-up seating from there and from the Ritz Cinema, Bull Farm, was taken out and re-installed at the Grove Street Mission!