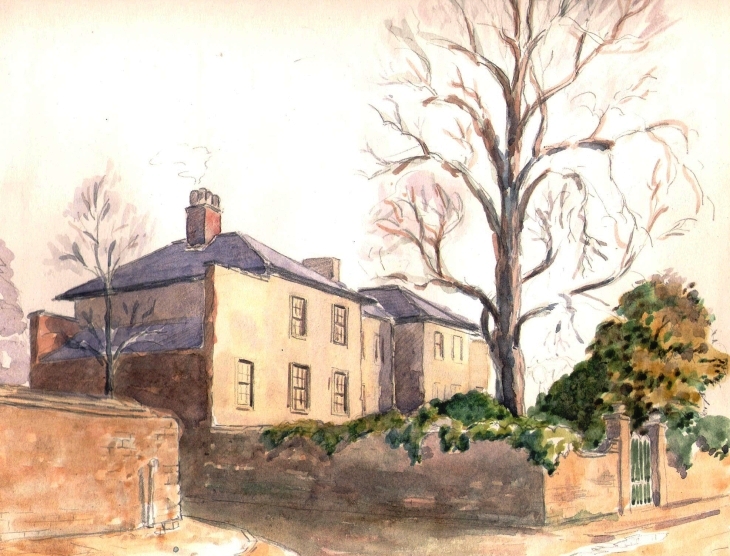 The Old Hall from a very old and faded photograph. 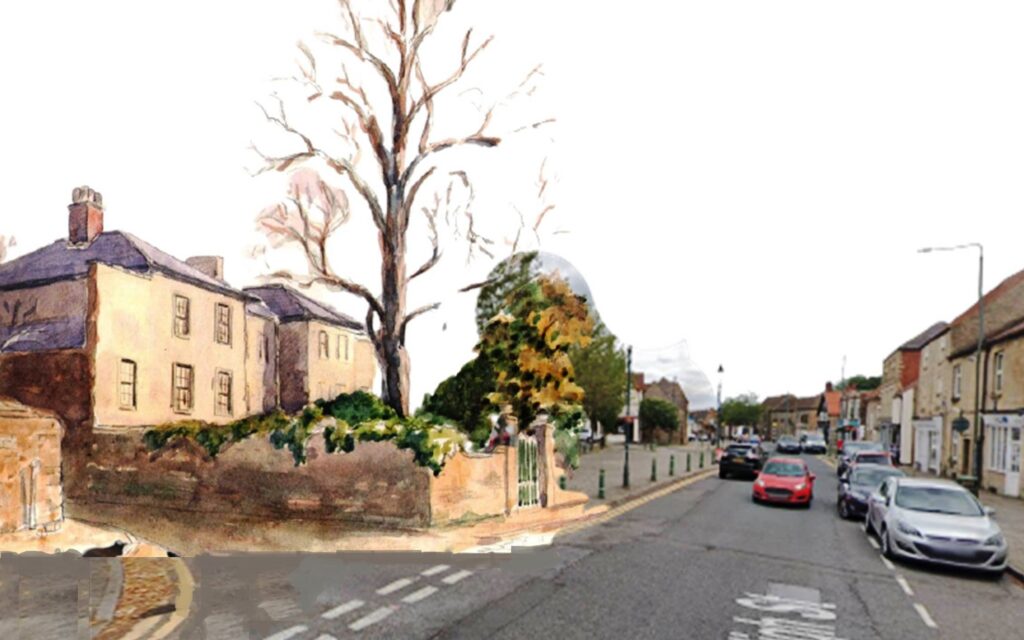 a picture of the Market Place today. 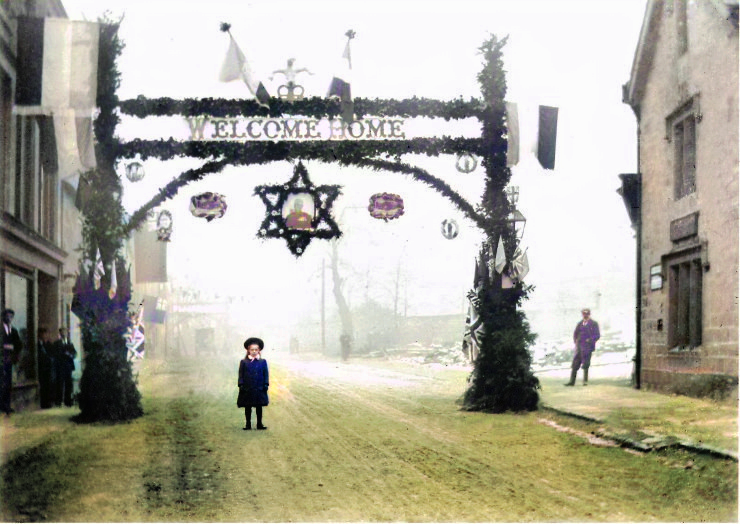 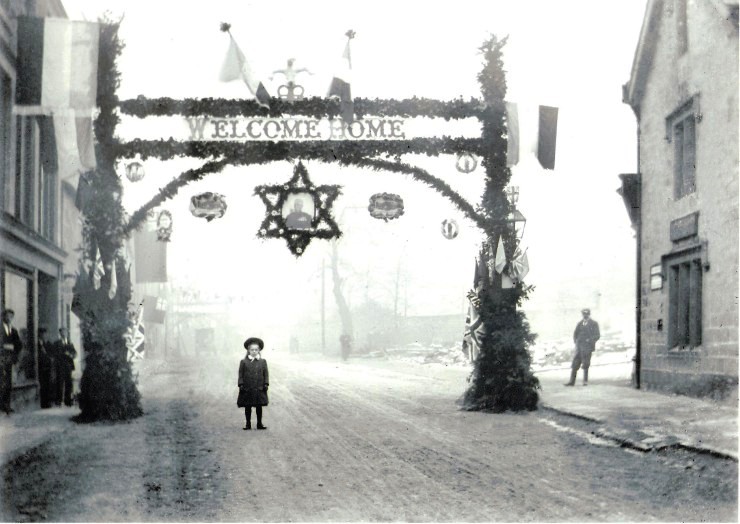 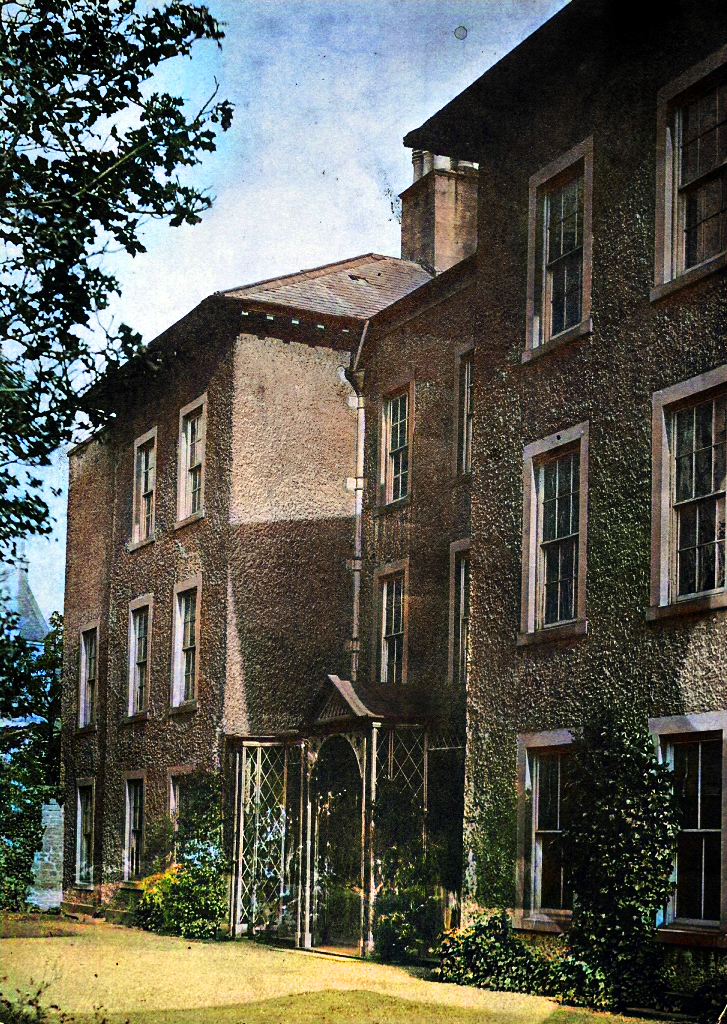 A colourised image of the front elevation of 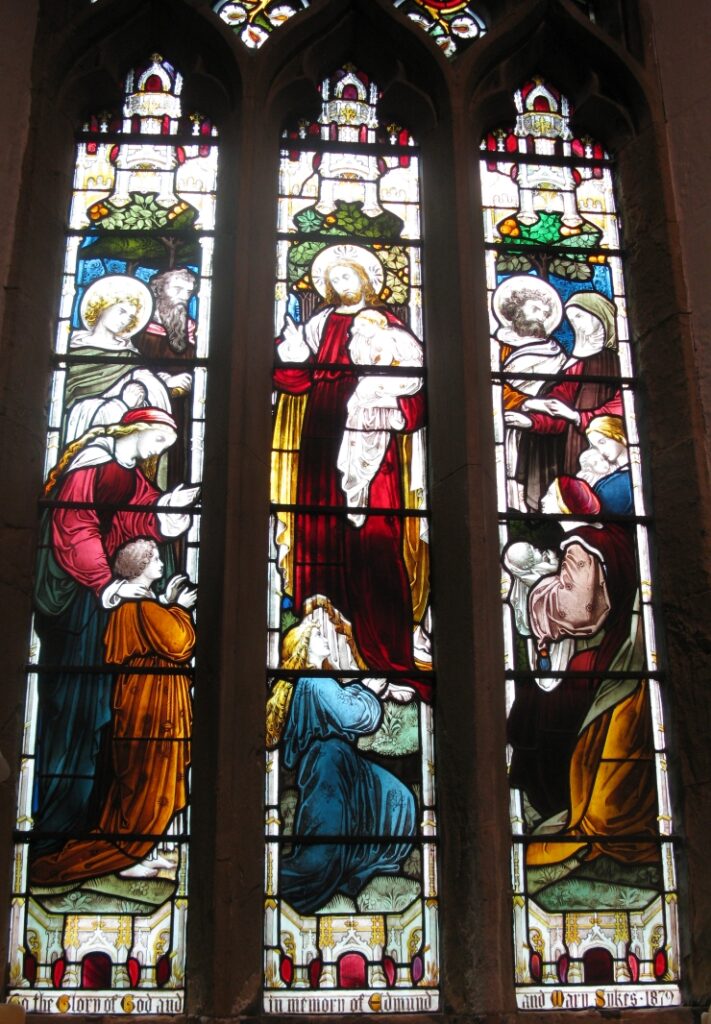 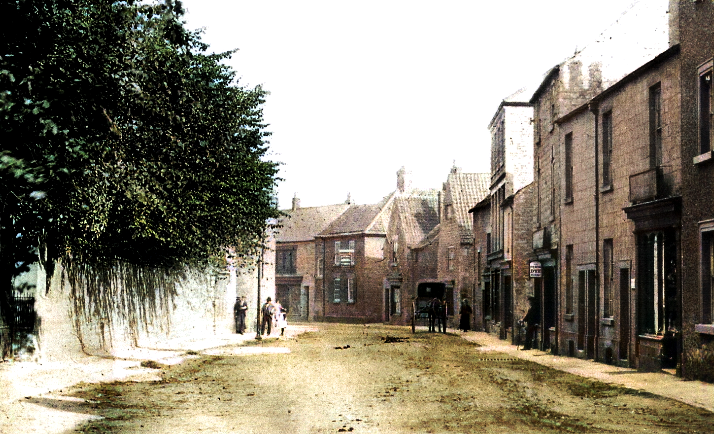 The boundary wall and hedge of the Old Hall. 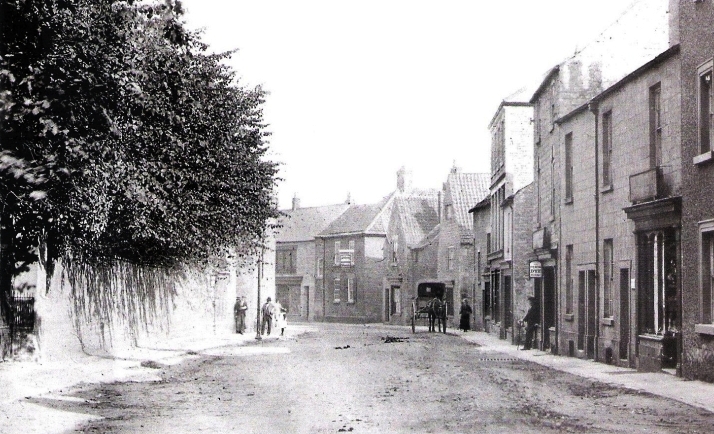 The open area in the centre of Mansfield Woodhouse on the High Street, which we now refer to as the Market Place, was until 1900 the site of a very large house called The Old Hall with grounds extending as far back as Park Road.

The house and associated farm buildings were demolished in the final months of 1900 and the neighbouring buildings at that time were, on the right hand side, the Post Office, ran by the Peat family and on the left hand side, Clerkson Hall accessed off Parkers Lane. You can see the rubble from the demolition was still there in January 1901 when the townsfolk were celebrating the homecoming of Major General Talbot Coke, a hero of the Boer War who resided at Debdale Hall.

I think he would have been sad to see the house as nothing more than a heap of stones as he travelled under the triumphal arches in a horse and carriage on his way home. His mother and sisters had lived there for a few years after his father had died.

The photograph shows the front elevation of The Old Hall facing the High Street. The symmetrical style of the building and its sash windows suggests it was built in Georgian times.

One of the first census records from 1841 shows three entries for the Old Hall. Three farming families, the Hollands, the Parnhams and the Bennetts. The first edition of the Ordnance Survey map of Mansfield Woodhouse drawn circa 1875 to 1880 details other buildings present behind the Old Hall. I believe they were farmhouse buildings with a tied connection to the Old Hall, hence the address, and that the occupant of the ‘big house’ was away the night the Census was taken.

The Old Hall has been home to several wealthy families in its time.

The Census Return of 1861 shows that Edmund Sykes aged 75, and his wife Mary aged 61, lived at The Old Hall with servants Samuel Hughes, Jane Barson, Ann Hillard and the cook Mary Lewin.

Mary Lewin fell in love with George Betts, the ironmonger, across the road – they married in 1868. When the Sykes were in residence at The Old Hall, the little lane that ran along the left hand side of their property became known as Sykes Lane. These days it is known as Parkers Lane.

Edmund Sykes was born in Halifax, Yorkshire, in about 1786, the son of William Sykes who established a bleaching works in 1792 in Stockport.

William built a large house called Edgeley House there for his family including Edmund who succeeded to his father’s business at some point before 1809. Richard Sykes, Edmund’s younger brother joined the firm in 1820 then called E & R Sykes. One of their customers was the draper, Mr Oldknow, of Nottingham whose family had connections with the establishment of William Hollins’ Cotton Spinning Mill in Pleasley Vale.

In 1828 Edmund retired from the family business and came to live here at Mansfield Woodhouse.

William Gething, a Mansfield starch manufacturer who later in his life lived at Church Street, Mansfield Woodhouse and Edmund each had shares in the Nottingham and Mansfield Railway in 1845.

Both Edmund and Mary were community minded and took Mansfield Woodhouse ‘to their hearts.

After Edmund died in March 1870 his wife Mary moved to a nearby house on Town Street. She was in receipt of an annuity (pension) and she continued to support St Edmund’s Church fetes, by providing exotic plants for the Cottage Garden fetes each year and making donations to the Parochial Ministry Fund used to pay the Curate’s stipend.

Mary, who was born at Islington in Middlesex, died in January 1878, aged 79 in the London area of Blackheath. Maybe she had returned to that area of the country to be near relatives. The following year a stained glass window, which depicts Jesus blessing the children, was installed in St Edmund’s Church in both their memories and as a token of their loyalty to the church.

The 1871 Census reveals that after Mary Sykes had moved out of The Old Hall, Mansfield born Mrs Anne Sophia Kindersley, aged 43, and her two daughters moved in. Both daughters, Natalie aged 17 and Eleanor aged 16, were born at Mansfield Woodhouse.

Anne Sophia Kindersley, nee Robinson, was the daughter of George Robinson, who was born at Papplewick and Sarah Sophia Robinson, nee Coke, who was born at Langton Hall, Pinxton. Anne had married Nathaniel Edward Bruce Kindersley, in 1852 in Great Malvern, Worcestershire, but later divorced him. He had been commissioned by Queen Victoria, as adjutant to the 97th Lanarkshire Rifle Volunteer Corps in December 1861. She and her two daughters were still living at The Old Hall certainly until the mid-1880s.

Kelly’s Directory of 1900 shows that she was then living at Edge Hill, Leeming Lane, next door to the District Hospital. Anne died in September 1906 at Mansfield Woodhouse. Edge Hill was demolished some 10 to 15 years ago and the houses on Springwood Drive were built on the site.

In 1888 Colonel Edward Thomas Coke, of Debdale Hall, died and his widow Mrs Diana Coke and her daughters, Diana and Aimee, moved to live at The Old Hall. But within three years they had moved out to live at The Grange, another fine Woodhouse residence, the grounds of which stretch from Station Street to Priory Road. Mrs Diana Coke died in 1895.
The 1891 Census shows Mansfeldt Henry Mills, a civil and mining engineer and his family in residence at The Old Hall, 2 High Street. Mansfeldt was born on February 8th 1852, the son of Frances and Mansfeldt Forster Mills, of Tapton Grove, Chesterfield. He served his time as a civil mining engineer with Messrs Forster and Hurst of Newcastle on Tyne from 1869 to 1872 and then for the next two years was manager of Weardale Coal and Iron Company, Low Law Collieries. Then in 1874 he joined in partnership with R G Coke, of Chesterfield, and carried out work on the waterworks of Wirksworth and Alfreton, and the sewage works of Tibshelf, Clay Cross and South Normanton, and acted as consulting engineer to several mining undertakings and to his Grace the Duke of Portland. He married Emily Frances Mary Nightingale in 1886 in St Helier, Jersey. He was accepted into the Institution of Civil Engineers in 1891.

Kelly’s Directory of 1900 shows that he was in partnership with the firm Mills, Coke & Turner, with an office at 65 Station Street, Nottingham. The Mills were probably the last family to live at the Old Hall for they moved to live at Sherwood Hall, Forest Town, around 1898 and the Old Hall was demolished in 1900. Later the family moved to Kingsnorth Gardens, Folkestone. Their son 2nd/Lt Mansfeldt Charles Nightingale Mills of the Royal Engineers was killed in action during the First World War on 29 December, 1915 aged 24, and is buried in Cite Bonjean Military Cemetery, Armentieres, France. He is commemorated on the Roll of Honour in St Margaret’s Church, Cliffe, Kent.

The Old Hall was demolished in 1900, most probably by Charles Vallance, a Mansfield builder and contractor who then set about re-using the stone in the building of the houses on Charles Street.

Edward Thoroton Gould was born in October 1747, the son of Edward and Mary Gould, and the grandson of Robert Thoroton Esquire, of Screveton Hall, Flintham, Nottinghamshire. He was an officer in the 4th Regiment of Foot, stationed in the American Colonies in early 1775. In the battle of North Bridge, Concord near Lexington, during the American War of Independence, he was injured, scalped and taken prisoner. Amazingly he lived to tell the tale and after his fortunate release and on his return, he eloped to Gretna Green with Lady Barbara Yelverton, Baroness Grey De Ruthyn, daughter of Henry Yelverton 3rd Earl of Sussex. She called to collect Edward from Woodhouse Place, the home of a family friend Major Hayman Rooke. After the wedding at Gretna in October 1775, they returned to repeat their vows in St Edmund’s Church, on 18 December, 1775. Sadly, Lady Barbara died in 1781 aged only 20. Edward later married Ann Dormer, daughter of the 8th Lord Dormer, at Budbrooke Church, Worcestershire, in 1791.

In 1792 Edward was Sheriff of Nottinghamshire, and in 1801 was listed as an official verderer of Sherwood Forest. He was buried in Paris on 18 February, 1830 aged 80.

If anyone has any photos of the Old Hall or of the families mentioned in this article then please get in touch with us either through this website or by contacting us via the Heritage Link (inside Mansfield Woodhouse Library). It would be good to put some faces to names.