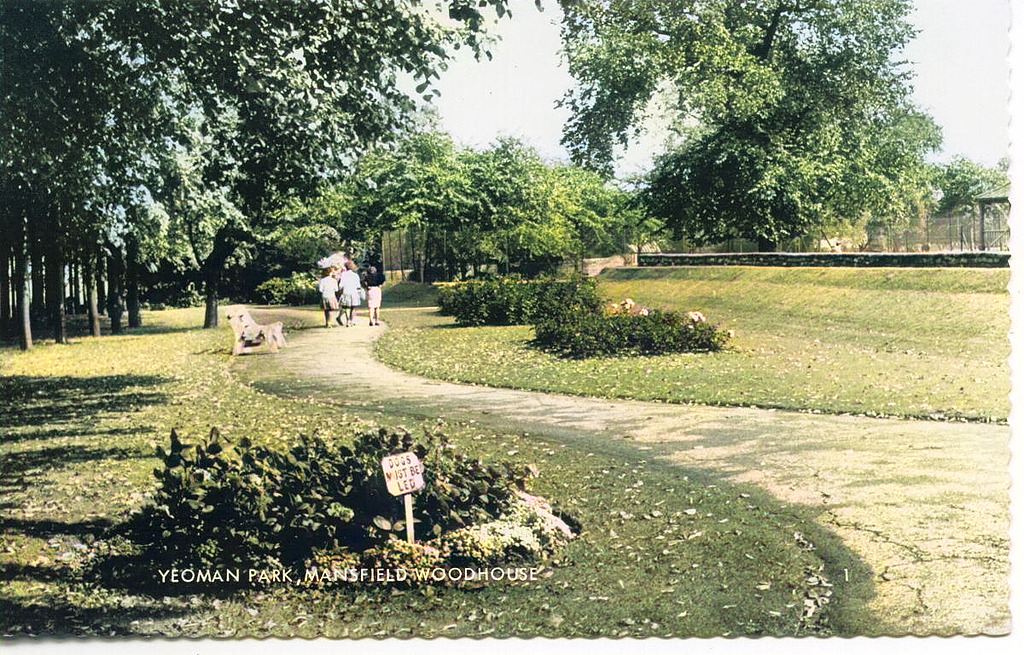 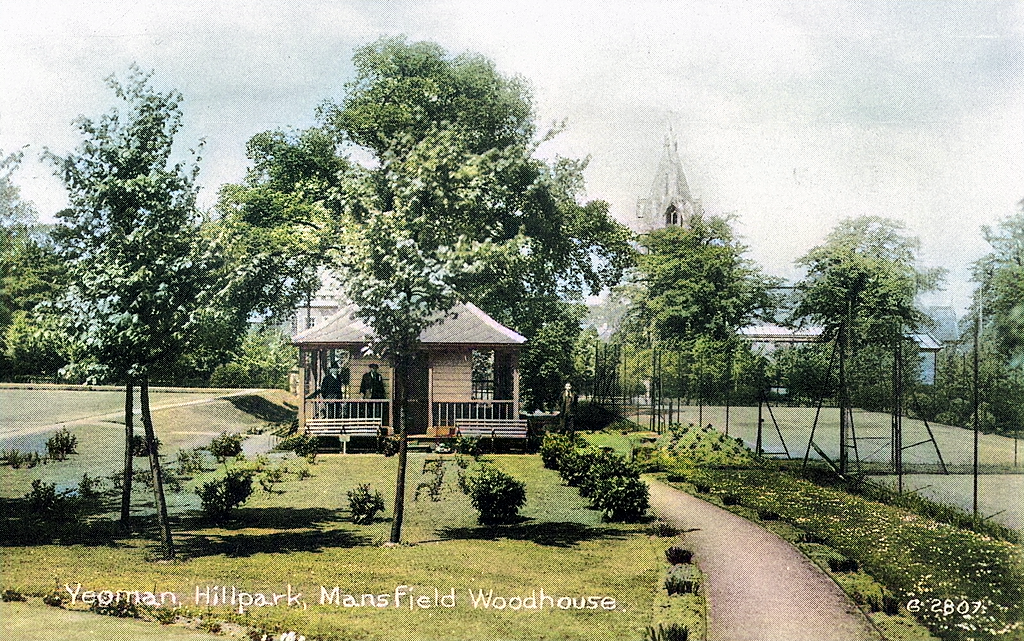 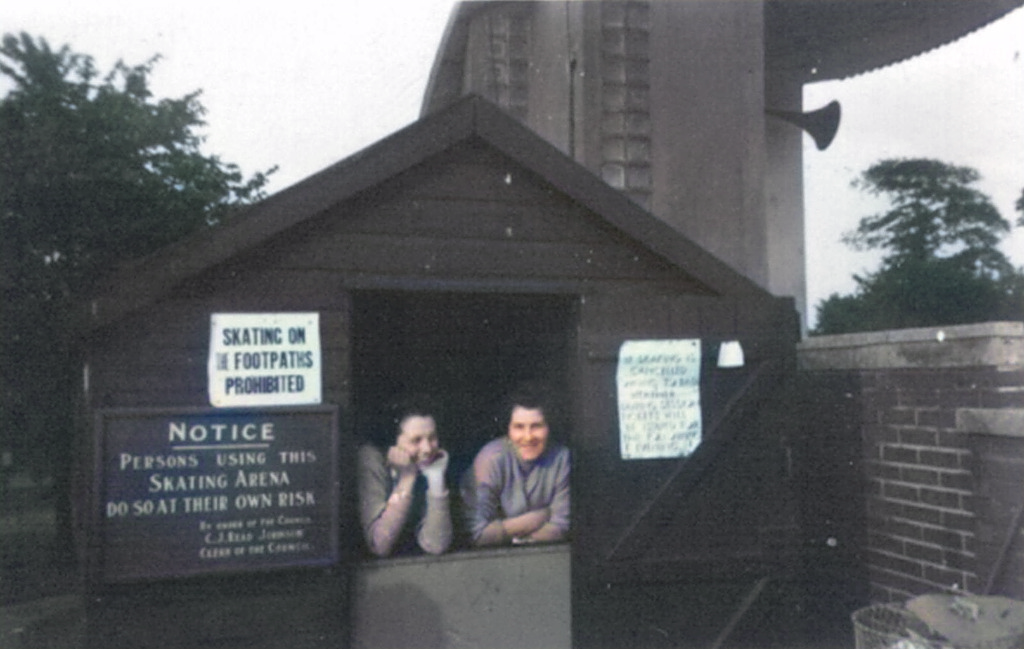 How did the name Yeoman Hill originate you might well ask?

Well, we have two possible answers. Although you might know of a better explanation!

Almost 400 years ago the knight, Sir John Digby, lived at the Manor House on Priory Road, when King Charles I was monarch and Sir John was one of his most loyal supporters.

During the English Civil War it would be easy to imagine Sir John mustering his yeomanry on the meadows across the road from his house in readiness for battle against Cromwell’s men. On maps of this area from many, many years ago those fields across from his house were called Yeoman Hills. Could it be that the name Yeoman Hills is derived from that time.

Another explanation for the name is one that is not quite so exciting. Let me explain – sheep have grazed that piece of land for a long time. A name for a female sheep in her second year before having her first lamb was a Gimmer or locally a Jimmin. The sheep hills or Jimmin Hills does not sound too dissimilar to Yeoman Hills.

Whatever the meaning behind the name, we do know is that it was as far back as 1902 that Mansfield Woodhouse Urban District Council met to discuss the possibility of creating a new public park for Mansfield Woodhouse to celebrate the coronation of King Edward VII. They thought the best field for such a purpose was ‘Yeoman Hills’ but it was the property of the Duke of Portland. The public already had a right of way through the field from Priory Road to Crow Hill Lane and a few years before, the Duke had had a large number of trees planted either side of that path and on most of the field’s boundaries.

The single pedestrian swing gate that gave access to the field off Priory Road was made of metal. That, together with its overmantle, was removed and melted down to be used for the war effort and the entrance was made wider to accommodate vehicles.

Other locations were suggested for this public park, such as land to the side of Park Avenue where there were two large fields, belonging to the Hodgkinson’s Trustees and some gardens belonging to Mr Frank Sykes.

The years passed by with much discussion, and a decision was eventually made. In early 1914 the UDC met the Duke of Portland’s head gardener, Mr F J Gibson to discuss the new layout of Yeoman Hill Park . It was agreed that the grazing of sheep could continue there until 29th August 1914. The field was last in the occupation of Mary Watkinson.

Yeoman Hill Park was given to the people of Mansfield Woodhouse by the 6th Duke of Portland in 1914 to commemorate his and his wife, Winifred’s 25th wedding anniversary and the 21st birthday of their son, the Marquess of Titchfield.  On the 1899 OS map (second edition) the field was numbered 440 and covered just under 14 acres.

The Indenture of Settlement of Yeoman Hill Park was signed on 16 December 1914 by The Duke and his son and Mansfield Woodhouse Urban District Council and it was ‘to be used only for the purposes of a pleasure and recreation ground for the inhabitants of the parish of Mansfield Woodhouse, and shall forever hereinafter remain open’. The council agreed to erect ‘an unclimbable iron fence so as to exclude children when playing; to ‘plant a belt of trees along the north side of the Park fronting Priory Road; and to erect a caretaker’s house on a site adjoining Priory Road.

A little story I was told one day – ‘Local ironmonger George Betts put in a tender to erect the railings (iron fence) at Yeoman Hill Park. His tender was higher than the rest and when asked why, he said that if he put the railings up they would last. He was given the job and the railings are still there.’ 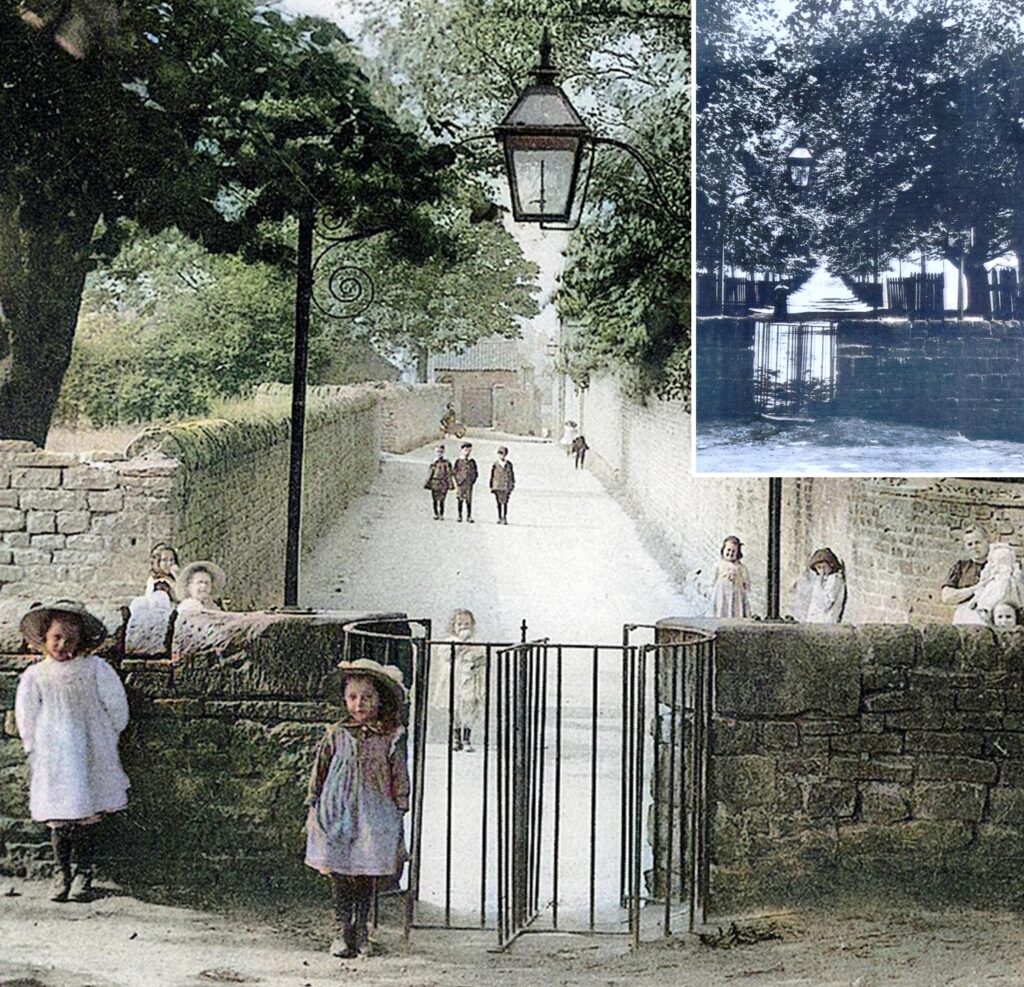 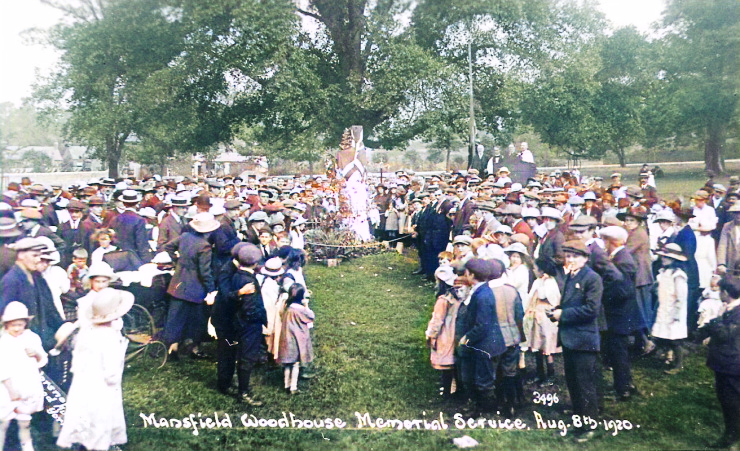 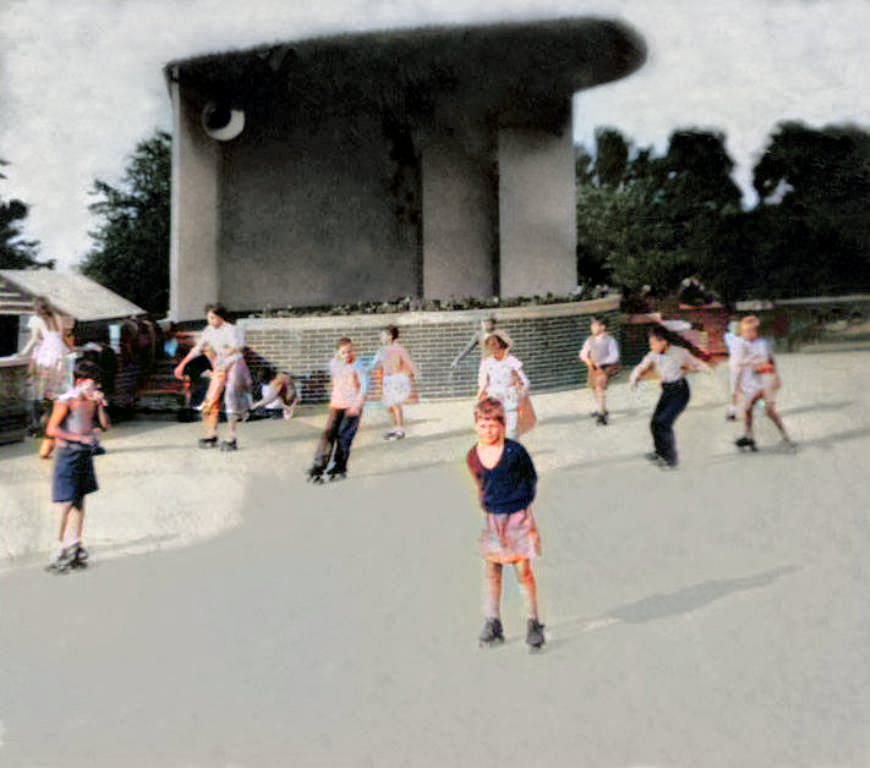 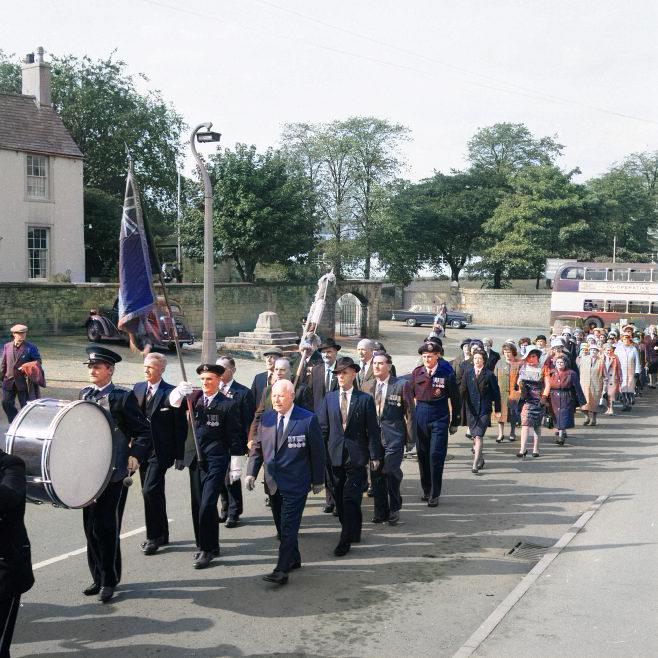 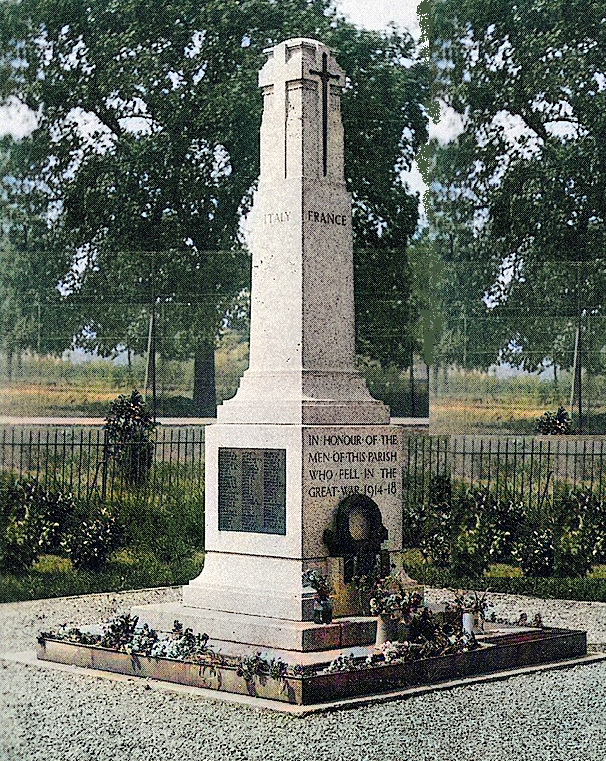 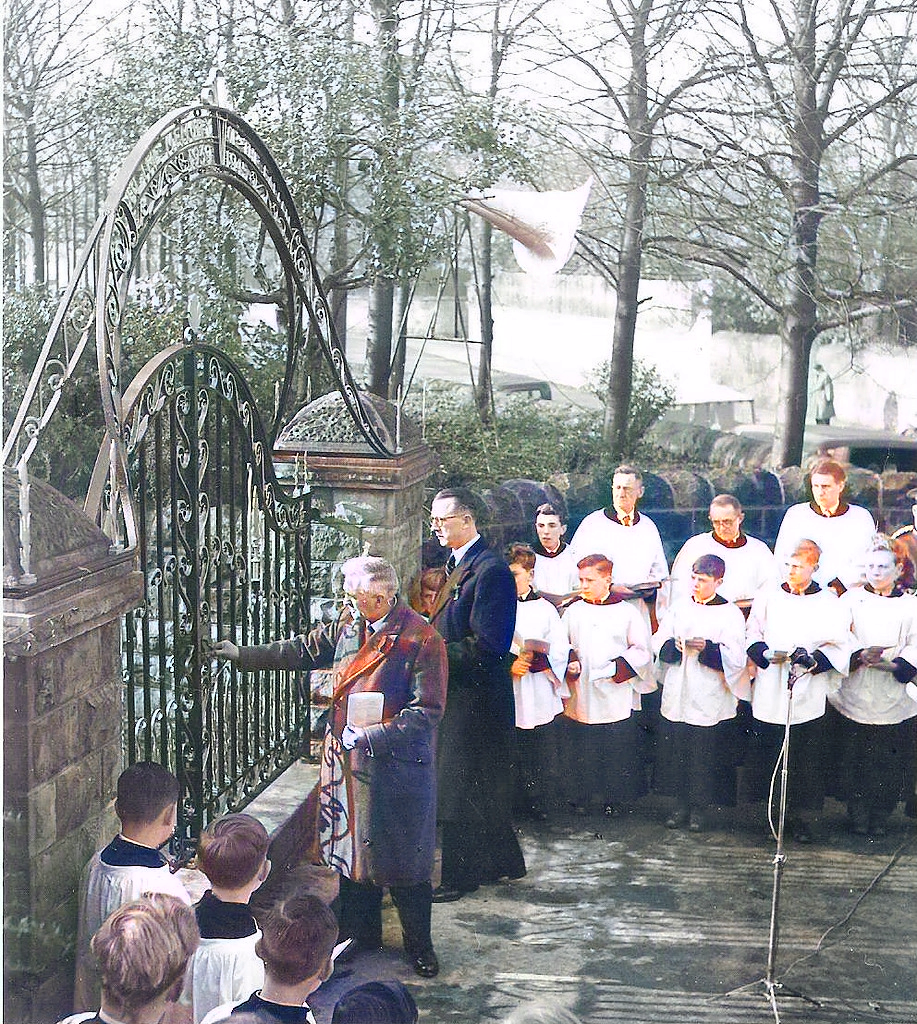 The first annual united Memorial Service in honour of the men who fell in the First World War was at Yeoman Hill Park, on Sunday 8 August 1920. The Mansfield Woodhouse branch of Discharged and Demobilised Sailors and Soldiers was in attendance. The service was presided over by William FrederickWarner Esq, chairman of the Urban District Council and the address was by the Rev A. Basil Brooker (chaplain to the branch), supported by the Rev J Lowndes, Rev S R Strongman of the Methodist Free Church and Mr Watson, chairman of the branch.

On 3 June 1923 a huge crowd gathered within the Park and on the surrounding roads and pavements. They had come to witness the unveiling of a war memorial erected to honour the fallen. Amongst them were 2,000 local school children, 500 relatives of the fallen, 4,000 representatives of local societies, the British Legion and several bands and choirs from local collieries and churches. The Memorial was draped in the Union Jack and a guard of honour was provided by four men of the Sherwood Rangers Yeomanry.

At 2.30pm the memorial was unveiled by Mr Francis Newman Ellis, a local JP and chairman of Sherwood Colliery Company. The Last Post was sounded and the Vicar of St Edmund’s Church the Rev A Basil Brooker dedicated the memorial to all those who fell. Wreaths and flowers were then laid by the relatives and friends at the foot of the memorial.

The Cornish granite memorial is 12½ feet high, weighs two tons and was cut by the Bromsgrove Guild Works. It features a square plinth of two steps, and carved on the four sides are the words France, Belgium, Gallipoli and Italy. On the side of the memorial facing the park entrance there is a bronze wreath and above a dedicatory inscription reads – ‘In honour of the men of this parish who fell in the Great War 1914-18’. Four bronze plaques are inscribed with the names of 226 local men who fought and died in the First World War. The total cost of the memorial was £529 and was paid for by voluntary public subscription.

The men who died in the First World War and who are commemorated on the War Memorial in Yeoman Hill Park, Mansfield Woodhouse

Ornate metal gates erected at the entrance to the Park were dedicated to the memory of local men who fought and died during the Second World War between 1939 and 1945. They were officially opened on 6 November 1949 by Councillor John Henry Brown, chairman of the Urban District Council and dedicated by the Vicar of St Edmund’s Church the Rev A G Barker who was chairman of the War Memorial Committee.

Bernard Richardson and George Bowler worked for Albert Fisher, painter and decorator of Church Hill Avenue, and they painted the memorial gates in the 1950s.

The names of the men from the parish who fell in the Second World War are commemorated on a plaque inside St Edmund’s Church.

The Friends of Yeoman Hill Park was founded in June 2008 and since then they have overseen many improvements made to the Park. They succeeded in getting the whole of the Park included in the Conservation Area in 2011 and had the Memorial Gates and entrance steps restored and a handrail installed in 2012. Then in 2013 they received the news that the Park had received Green Flag Award status.

They celebrated the centenary of the Park with all sorts of events in 2014. They have sowed a wild flower meadow, had a photo competition, commissioned a stone sculpture, created a poppy-shaped memorial and buried a time capsule. They have also planted a small orchard, created raised beds, planted bulbs, and installed a youth shelter called The Crib. Then in 2016 they received the Chad’s Love Where You Live Award.

Thousands of people have walked to, in and through the Park over the decades since it was first opened back in 1914. Sportsmen and women have played bowls, football and tennis there. Yeoman Hill Park Bowls Club has won many trophies over the years.

By 1929 the Park had been laid out, with a bowling green and pavilion, tennis courts, public conveniences and a park-keeper’s lodge (11). In 1941 Edward Spavold was Yeoman Hill Park keeper.

Over the ensuing few years the wooden path edgings were becoming dilapidated and so the Council’s surveyor submitted proposals for replacing them with concrete ones. The total length required, including around the bowling green, was 172 yards. It was suggested that as most of the paths were on the curve that the edging be laid in situ at an estimated cost of £44. He was also instructed to look at the cost of purchasing a 4-stroke Atco motor mower suitable for use on the enclosed portion of the park.

The concrete bandstand in the park, built in the Art Deco style, was erected about 1939. Its foundations were laid by Rouse’s, a local building firm. During the summer months the council would arrange Sunday band performances.

Allotments were created and planted with vegetables on the Park during the Second World War as part of the Dig For Victory Campaign.

Also in the Second World War there was a public gala called ‘A Stay at Home Holiday’ at Yeoman Hill Park organised by the Urban District Council. It started on Saturday 31 July 1943 and was officially opened by Bernard Taylor, Mansfield’s MP. Monies collected were for the Red Cross and Comforts for Troops’ funds. All sorts of events were put on through the week-long event including concerts by the Cresswell Colliery Band, the Lancashire Fusiliers Regimental Band, Mansfield Colliery Brass Band and Nightlight Concert Party, and there was dancing, Punch and Judy Shows, etc. Performing live were the Three Apollos, an acrobatic act; Douglas Hinton, a conjuror and illusionist; acrobats Revis and Lewis and comedy juggler Will Hartley. The Fur and Feather Society and Domestic Poultry Keepers’ Association had a show and there was a show of fruit, flowers and vegetables organised by the Dig For Victory. Committee. Rube Sunshine and his All-Star Band performed on the Sunday after the local clergy had conducted an open air service. Rounding the week off was a series of boxing matches and the fight between George Butler of Blidworth and Phil Close of Rotherham, was the highlight. Other boxers included Alf Wilcox, of Bilsthorpe v Barry Walker of Shirebrook; Jeff Carr of Rainworth v Eddie Wheeler of Shirebrook; Reg Williams of Rainworth v Ginger Phillips of Mansfield Woodhouse; and Kid Spencer of South Kirby v Ray Cox of Bilsthorpe. The MC was Mr W Phillips and referee was Mr J Kirk. 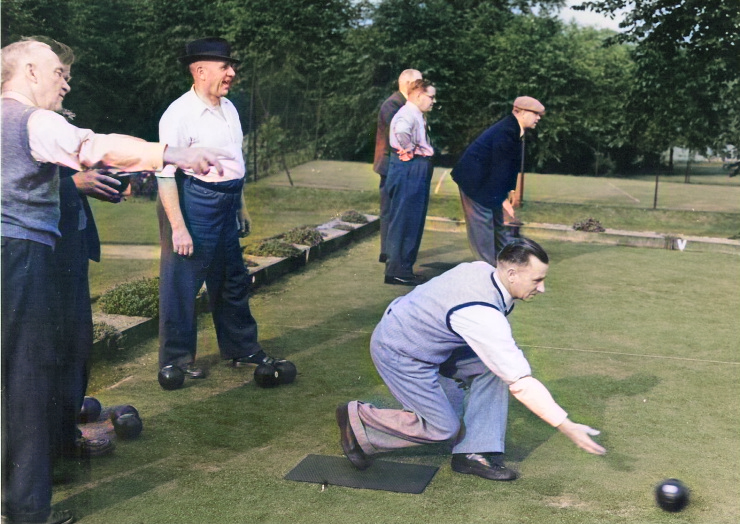 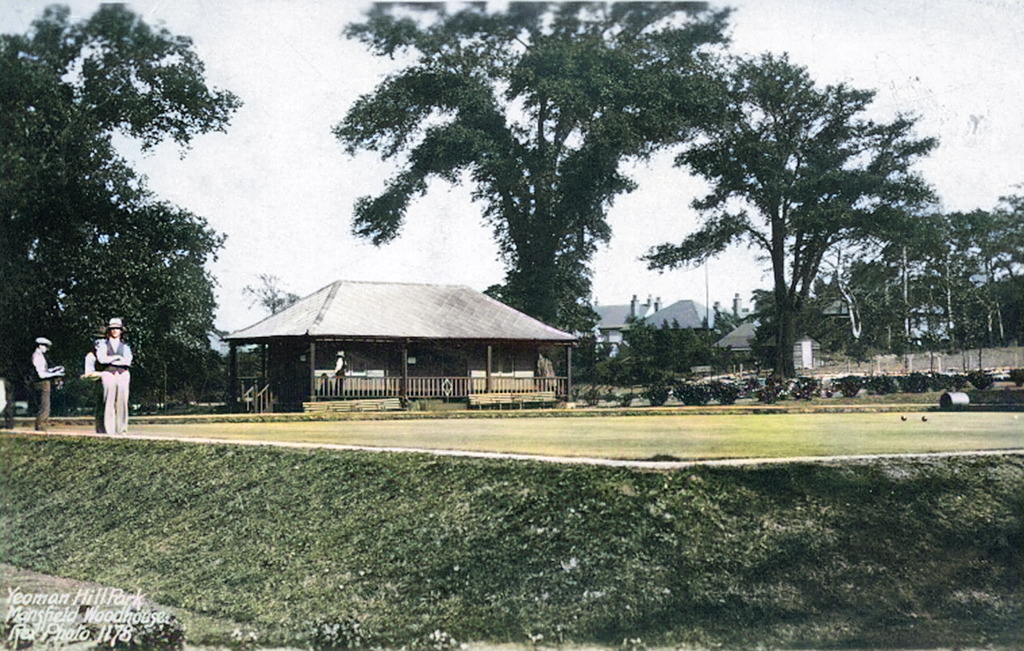 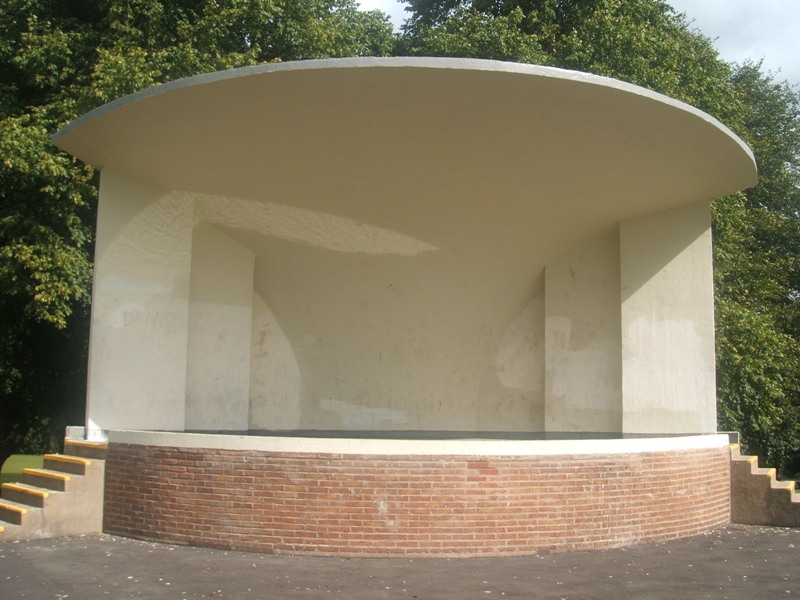